The second year of the urban garden project began in spring, 2019.

As mentioned in the previous wiki page around this project, symbiotic rhizobial bacteria are used regularly by big agrobusiness 'farmers' - providing incredible yields.

Here is an inspirational image of a local field of peas! 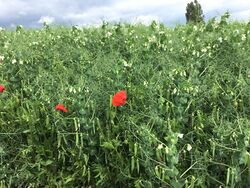 After several attempts to contact the farmer, however, I found out that, actually, he never adds any symbiotic bacteria! There are plenty of the needed rhizobial bacteria found in the soil around us here in Switzerland, with big nodules seen readily (as 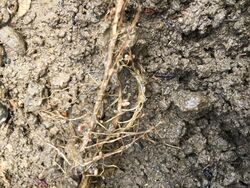 
So, whether our local outdoor gardens have any need of such bacteria is an open question!

With this experiment, we hope to find out if, in ordinary 'urban garden' settings, such symbiotic associations between plant roots and bacteria will also provide better harvests of delicious peas!
To note: None of us are experts in this field, though we have had some advice from at least one, who mainly worked with alfalfa and its symbionts, and we are learning by doing!

We want to encourage open science, and are simply using a google drive to collect data to start this second year...
(This can be strongly criticised, especially as huge populations, for instance in China, do not have this resource! We hope to work toward a better solution and thank you for any input!)
Sadly, the summer heat wave killed off many plants, but some data was nonetheless collected.
We discussed all the results at an Open Hackuarium event, 6nov19, and planned for the next round. Now (June 2020), the harvests for the 3rd round are almost complete, and we are planning a big wrap event (Covid-19 allowing) for an #OH evening the 9th of September.

Here are some initial images of the cultures, inoculation and growth of plants.
To note: groups of plants marked A and B were given to participants, with no indication as to which were inoculated and which were mock inoculated!

Even though we had quite a disappointment from the plants in the garden, it was clear in lab conditions that the two sets, A and B grew identically...
In the garden, set B was slightly worse off... However, for both sets about 85% of all plants died!
Therefore, this year's trial really depends greatly upon participants, who got only x2 or x4 plants of each set!!
The first plants were given to them on 28may19, the same day the image of the Denges Pea Field, at the top, was taken!

to note also: there were no signs of root nodules in the plants transplanted 27may19!

Participants were told: This is 'is a citizen science project, so we really want to collect data!' and were greatly encouraged to make regular notes!
They were asked to abide by just 3 basic rules:
1) put the plants of the two groups A and B in the same conditions (for sun and watering especially)!
2) follow the plants’ growth and make at least one pictures of the two each week (making sure it is clear which are A and B)
3) count the harvest - both number of pods and the number of peas inside


They are allowed to transplant the plants as they like - separate pots are recommended, but if they have a big garden, it is also ok to plant them as they like.
First pictures to show how the initial set up is organised were requested.
As in the previous year, any data with numbers was very much requested (i.e. numbers of flowers, heights etc...)!


Toward a more sustainable Hackuarium?

If we get strong data next year, perhaps all this will become much more professional, and maybe even provide funding for the lab, perhaps...
We will see how it goes, after discussion the 6th of November...

Help for edits/translation/ etc. very welcome, as this is all a work in progress!