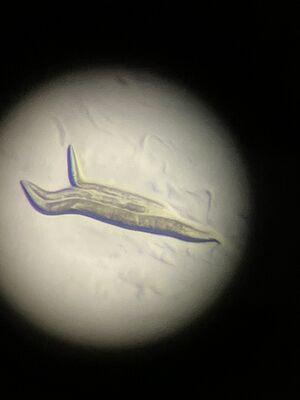 Some 'rescued' animals, an adult and two larvae - QC activity on a mutant RNA transcript for their major muscle myosin makes these rollers paralyzed... (The adult also has an ordinary vulva, but problems laying its eggs...)

With colleagues in Basel and the approval of of the Federal authorities in Bern, we are looking further into some molecular mysteries around all this...

Our first transgenic animals (well, as an invertebrate some say we should just call them GMO) are in the lab, and we plan to learn a lot by making some more!

Here is part of an open access paper's introduction more focused on another quality control mechanism - but it all starts with mRNA surveillance (or nonsense-mediated decay):

Although protective under many circumstances, the NMD pathway also contributes to pathological suppression of expression from numerous disease-causing mutations (about 11% of point mutations responsible for human disease [Mort et al., 2008]).

(Selected References from the paper excerpt, at bottom...)

Would you be interested to try some worm research?

Both a Crispr knock-out and knock-in (mCherry) and RNAi are planned, too!

Here is the original paper about the cloned worm gene (Aronoff et al, 2001), about which we hope to learn more.

We have already confirmed old results here, with rescue by PCR products, as shown in the image...

Sequence confirmation on an old deletion in the gene (but much after the original paper) gives us clues about what is most important for function, and we speculate some essential function, partly because mutations in the gene are rare (and the only point mutations found were on either end of the same intron...).

In humans, there are two copies on different chromosomes, with the X-linked one tied to Intellectual Disabilities, and more interesting features in knockdown and attempts to knock this QC mechanism out in cells...