This will be the space to add info about the Moss Fauna that are being studied at the Hackuarium!!
Glass petri dishes with moss are available for all to examine!
(below the bench, above the drawers, opposite the microscopes)


Some very interesting creatures, including rotifers, amoeba, and waterbears (tardigrades) have been spotted.
The latest 'mini-menagerie' added cultured waterbears from Vanessa to moss from Glion.

The idea behind this effort is to raise awareness of how many different species can be found in this natural habitat!
Hopefully, this will aid in terms of public consciousness about how we impact these varied creatures without even realising it, and stimulate conservation efforts!


Amazingly, fully dry moss harbors many creatures that can be 'brought to life' when put in water!
Following the evolution of these miniature ecosystems over time is also of great interest, so eventually this page will link to other pages following individual 'cultures' and organisms. Lichen for instance have become very interesting for new menageries, as they were recommended as more likely to harbor Tardigrades by an old colleague (BG in North Carolina).**


Just to begin, here is one special protozoan, first spotted on the move by Sam. (thanks!) 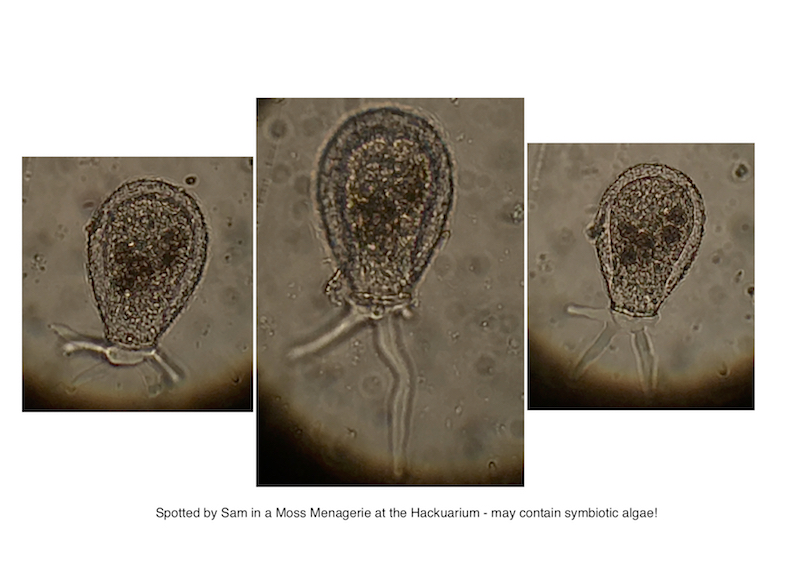 Thanks to a number of inquiries, I finally found someone who could identify this being, which is actually a sort of amoeba*, one of a number termed 'testate amoeba' which make a special protective 'helmet' of mineral matter (especially silica) and its own secreted 'glue.' After reading Neal Stephenson's 'Seveneves' not so long ago, this was of special interest to me, because he discusses how early life using such strategies would be expected to be protected from cosmic rays and other wavelengths of the electromagnetic spectrum. (Furthermore, robots in space might benefit from a biomimetic form of such protection to keep their circuits safe and running!)

George Sartiano is his name, a retired professor and medical doctor in oncology; and he was so inspired by my request, that he has made a new youtube channel for his video micrographs (now with over 50 - check them out!)!
This is some of the info he passed on regarding the being above (which had a population explosion in at least one of the moss menageries):
This protozoan is most likely of the ' Order Arcellinida – a form of testate (shelled) amoeba.Testate amoebae have a “test” or tectum of their own making. The amoeba lives within the test, which is typically shaped like an inverted vase, with a single, terminal ventral aperture, through which the organism protrudes its pseudopodia (in your photomicrographs, the pseudopodia appear to be lobose in type). The test is often composed of mineral bits, sand granules, fragments and frustules of diatoms, etc., held together by a cement-like secretion of the amoeba ---sometimes giving the shell a tossed-together, hodge-podge like appearance. Various genera/species are more or less selective of the content of their shells, providing some basis for identification and classification. The nucleus of the organism is often visible through the shell; it usually takes on a spheroidal or round appearance; it may well be the dark, spherical object located centrally in your middle photomicrograph. Freshwater species often contain cytoplasmic organic symbionts – hence your observation of possible algal content is probably correct (photomicrographs #’s 1 and 3 illustrate this best).
Beyond identifying the organism’s Order, there are many genera and numerous species of Arcellinida. My initial reaction to your photomicrographs was to think that it is a difflugid (i.e., a species of difflugia). Difflugia are quite common in moist, watery habitats, and the descriptive literature does specifically mention mosses (re: your observation).'


George is great, and also recommended contacting another friend very interested in problems AGiR! is keen about (i.e prevention of disease via avoiding exposures to things that might impact genomic integrity...)!
(An expert in testate amoeba, Edward Mitchell, turns out actually to not be so far away, in Neuchatel; and he recently pointed out that this one is most likely a Nebela sp. which does not generally have symbiotic algae.)


Here is a new page of further images (ca. 2018) - when the micrometer is seen, the scale should be about 5 microns per 0.1...
Here is a link to a data base in Japan, full of images of all sorts of organisms, including protists...


Here is a link to a fully searchable book about protists Kudo's Protozoology for further explorations! (in English)
Here is the classic from Kahl especially about Ciliates! (in German)
If you esp want to see his pictures, here is a last site!
(thanks to George again, for helping me find these resources!)

Please tell us if you find anything special in the moss menageries!

In case you would like to find out more about AGiR!, or the main project of AGiR! at the Hackuarium, please find follow the preceding links.

*To note (this is a 'fun fact' from Wikipedia): Amoebas do not form a single taxonomic group; instead, they are found in every major lineage of eukaryotic organisms. Amoeboid cells occur not only among the protozoa, but also in fungi, algae, and animals.
(I also saw a very bulbous one with nice cytoplasmic flow in the old 'Glion moss menagerie' yesterday! I haven't decided yet if it is about to engulf a ciliate, left, in this short clip... )

** More recently the lichen menageries have become of even greater interest, with recent replication of results from last fall (2021) providing an interesting hypothesis about lichen formation, to be discussed further in another new page - baby lichen (?) observations ... Your feedback is welcome!