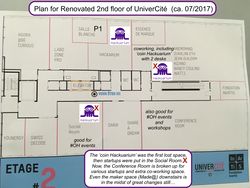 When Hackuarium was asked to pay rent as if it were already a startup with a successful business plan, the members decided during an extraordinary general assembly meeting (on 12 September 2018), that we would have to look for a new place to set-up our biohacker space and P1 lab, with enough room to allow further growth and exciting collaborations. A cooperative (Space Alliance Coopérative) with two other associations (Octanis & Polymeka) and a few other startups came together to look for a new place to call home and provide space for everyone's projects and work. Our first activities in the new spaces started in February 2019. Our biolab and inner sanctum for electronics and imagerie and more are already facilitating project experiments, with more fun in the pipeline with our coop colleagues, like Sam and Raffael from Octanis, who were also early members of Hackuarium.
Octanis was born as a Hackuarium project after all, and now has not only its very own association, but two branches of its co (the other in Zurich) - Octanis Instruments. :) Big Bravos to Sam and Raffael!
The great challenge will be to become sustainable - the building is already slated to be destroyed in the next 3-5 years. Hackuarium and the coop must keep making friends and watching out for opportunities for a new, more secure space! If you have ideas in that regard, please contact hello (at) hackuarium...