(as all molecular microbiologists are aware, each researcher will have their particular ways to do the same things... our take on it all is that many methods may work well indeed and should be shared more!)

Note: To ideally work in pairs, at least, and score one another's cells after preparation.
This helps avoid problems of human reporting bias, it is believed.

(optional fix with methanol:acetic acid 3:1) Stain cells with Methylene Blue (0.5% aqueous, unless optional fix – then can be made up in ethanol...)
If have slide dipping containers, coplin jars, so much the better, but can also just put a drop on the slide.
Leave stain on at least 1min then rinse with drops of water, collecting blue waste liquid* in a beaker. Let sample dry and examine under a microscope at about a 200x magnification.

Quantitation is crucial – micronuclei can arise from normal processes, but an increase of 2-4/1000 to 20 or more per 1000 cheek cells could mean one should consider deleterious environmental exposures ... 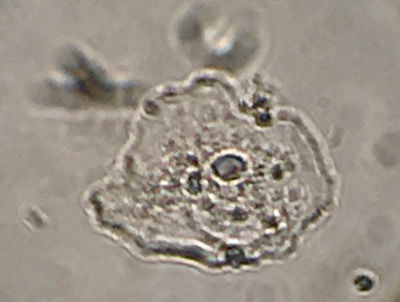 Have a look at the Prezi for the workshop done 18may19)!

Here is the 'timelapse' made during the workshop two hours in 30s??


A First Real Experiment!?
For a recent micronucleus workshop (18may19), two sisters gave their cells to us to test blind (just had samples A and B).
After counting 2 slides for each (>2000 cells), one had about 3 micronoyaux per 1000 cells and the other about 11, but it was in the opposite sense than what I predicted! (the more sporty sister actually had more…).
Anyway, both are in the ‘normal / low’ range! (basically the same given variance), but we suspect the older sister has less stress in her life, or deals with it better...)
It is with more than 20 or 50 per 1000 cells that we say one should reconsider lifestyle choices (and maybe see a doctor!)!!


More Experiments Ahead in the context of Mercury Exposure!? After an initial visit to Colombia, where there are problems of mercury contamination due to mining, and one river, the Atrato, has actually been given 'human rights' through legal actions to help protect it, the idea is to do micronuclei workshops for a project co-sponsored by ProHelvetia and the Colombian Association, Màs Arte, Màs Acción. More information will soon be available on a new wiki page, Micronuclei and Mercury.