Difference between revisions of "AGiR! for genomic integrity"

Genomic integrity is a new 'big picture' concept to aid public health efforts and basically includes all the molecular genetic details of cells! So many things we commonly choose to do can impact genomic integrity, also potentially affecting future generations!


At the Hackuarium, AGiR! hopes to really get some citizen science action going - developing DIYbio methods to readily assay *your very own* cells for DNA damage, using classic (circa 1980s) techniques. If these can still be sold in 'kits,' maybe it will also be simple to make them available to all for open source efforts?

Here is the basic plan: using inner cheek cells for micronuclei and comet assays!
If you want the quick idea, without reading too much more, the poster explaining genomic integrity projects at Hackuarium is worth checking out!

Watch this space for more info and visit the AGiR! site

This is a part of a Hackuarium project by AGiR! on genomic integrity, to find out more and help raise awareness in the public interest.
This wiki page is under construction, and will help keep track as we develop open source simple protocols of two classic methods for quantitation of DNA damage in human cells, the micronuclei and comet assays.

Genomic integrity is a big picture concept which includes basically all the molecular genetic details of cells (from RNAs to DNAs and the epigenetic marks for proper gene expression), and thus is a topic that can be explored in several ways. For the genomic integrity project at the Hackuarium the focus will be on directly quantifying DNA damage. Comet and micronuclei assays were developed in the 1980s and publications about use of these assays on human cheek cells are already in the literature. These methods, as open source protocols, will encourage citizen science and raise awareness. Additionally, they can provide an easily "workshopable" way to show people more about their own cells, while learning how to assess DNA damage.
In other words, this experiment can be used as a gateway, to demonstrate and raise awareness for everyone on the damage possible from many common substances or activities - on your own cells, your own genetic information!
In the scope of Hackuarium activities, mammalian cell cultures are still (april 2016) a no go, but freshly isolated cheek cells from individuals can be used to do tests on DNA damaging compounds or activities. Such 'ex situ' assays might seem more attractive, especially if potentially toxic compounds are tested! (but the caveat is that it is only after the metabolism of some compounds that the DNA-damaging effects are 'revealed' - for example alcohol to DNA-damaging aldehydes…) For this reason, 'citizen scientists' will be encouraged to first get baseline measures on their cells, then do a 'trial' and test its effects (i.e. daily swimming, chocolate or blueberry consumption, or some other activity). The comet and micronuclei assay results can also be compared after a 'wash-out' stage, without the given trial activity… These would all provide 'biomonitoring' results about the given 'intervention' from baseline conditions.
Another possibility with these assays are to perform ex situ experiments on your own cells, as mentioned, which would be giving acute genotoxicity information...
In order to further investigate compounds that might cause DNA damage, a classic test of bacterial reversion (i.e. the Ames test) or on bulk DNA may also be nice to establish at the Hackuarium.
If enough people follow the 'open source' protocol(s) that we develop to follow controlled exposure protocols or test substances directly on their isolated cheek cells, and clearly significant effects are observed, we may even be able to corroborate or refute previous works in the literature. (Please go to the bottom of the page, for one concrete example being considered.)
Your ideas and comments are welcome throughout btw!

Cheek cells are continually renewing epithelial cells and are about 50 micrometers in diameter. 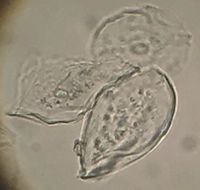 Three cheek cells imaged on the scope at the Hackuarium.

Here is the link to the Prezi Rachel presented (13apr16) at an Open hackuarium night! Prezi on DIYbio for Genomic integrity!

More on comet cells and micronuclei to come soon! But in the meantime, here are the references to the cheek cell papers mentioned in the presentation (and in the prezi):
Szeto et al (2005) Mutation Research 578:371-381
(In this paper, green tea is also shown to be protective.)
dos Santos Rocha et al (2014) Genetics and Molecular Biology, 37(4)702-707
(This paper looks at micronuclei in cheek cells (and also analyses apoptosis) from mouthwash and alcohol users.)


To note: the two assays proposed would be analysing only limited aspects of 'genomic integrity' at the DNA level - large scale chromosomal disruption in the micronuclei assay and double-stranded breaks with the comet assay!
There are many more methods that could look at other aspects (particular nucleotide lesions, reactive oxygen species and inflammation, gene expression, microRNAs, etc.) of genomic integrity!

General principle for both assays: looking at treated cells on slides through a microscope, imaging and quantitating the effects (i.e. counting number of cells with micronuclei relative to the total number of cells, or determining the length of the 'comet tail' - the longer the 'tail' the more DNA breaks - on average).
The comet assay requires more treatments and a short 'electrophoresis' step, as compared to the micronuclei assay.
For the purpose of cheek cell comet assays, use of a special chamber with mini-electrophoresis capacity, capable of microscopic investigation, is being planned.

'*Proteinase K is recommended in buccal cell protocols, but DIY alternatives are being considered, like tablets for contact lens cleaning
'** To protect the DNA from digestion

Very likely, working in pairs will be ideal for workshops based on these assays, since 'self-reporting' is generally so biased! (AGiR! is actively investigating this issue, too, since it has effects on both sides of the equation, for producers as well as consumers!)

Parameters for the Open Source Protocol (still under development!)

To get simplest protocol established, compared with the standard lab techniques

then for each individual: obtain baseline values (number of micronuclei per thousand cells, or average comet tail lengths/category distributions) Ideally to get at least 3-5 independent measurements first Then, for 'in situ' experiments to vary some lifestyle component, and repeat the assays again. (i.e. exercise, diet, exposures...) Compare the obtained values - baseline vs. intervention...

To get Open Source protocol out to the DIT Research communities

Then get workshops running, to familiarize people to the technique, and start gathering acquired baselines for individuals, who will either do ex situ experiments on their own cells, or vary something in their lifestyle (e.g. eat chocolate or blueberries, go running, stop drinking, etc.), and then start collecting 'big data' as more people join in this effort!

to do both comet cell and micronuclei assays by the simplest possible methods, with the bare minimal laboratory reagents/infrastructure...

To get going with classic methods, on cheek cells, esp following Szeto et al protocol comparisons for the comet assays, and staining fixed cells for the micronuclei...

Try proteinase K only treatments (no trypsin). Cells simply dissolved away first few times, never seemed feasible to even run the electrophoresis step!
On the 4th set of attempts (2dec16), by watching carefully as they were being digested, the reaction could be stopped early enough for some visible nucleosomes to remain.
Simply running the slides for the electrophoresis step in TBE, allowed the formation of the first cheek cell 'comets' in the Hackuarium!
(thanks to Niko at DMF for letting me go on the departmental scope very quickly that afternoon! :) 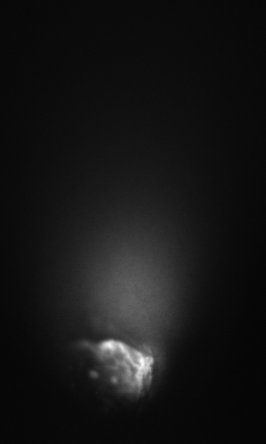 This cheek cell 'comet' was imaged by epifluorescence after staining with SYBR-Safe dye. 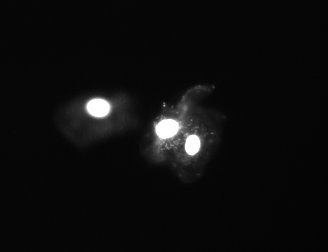 These are control cheek cells that were embedded and treated with all buffers, but never exposed to proteinase K and not run during the electrophoresis step. 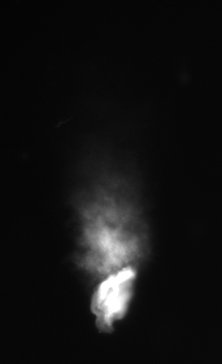 This 'positive control comet' was obtained after treatment of embedded cheek cells also with hydrogen peroxide, before the proteinase K step.

What's new compared to #1: getting the comets to show up with a non-fluorescent staining protocol (if possible)!

What's new compared to #2: Development of a microfluidic chip in a slide with miniaturised electrode links, to run the comet assays in a miniformat, that can then be directly examined on a basic microscope... Design and implementation of this cheek cell comet device may be a key element for a crowd funding campaign (aiming for September 2017).

More to come! Who else wants to try?

Results / Feedback from use

Protocols and measurements to be linked from here: comet protocol development page

That this very simple 'origami' Foldscope will allow systematic cell counting and imaging for both micronuclei and comet assays is being tested.
Might be readily possible for teams of 2; and alone, with further adaptations (see youtube videos on Foldscope adaptations for high magnification with a condensor rig, and for fluorescence...)

As one fun standard protocol for the open source 'citizen science' procedure, which might help resolve controversies in the literature even - for instance, about flavanols in chocolate and what else they might be good for (cardiovascular health, cognition, etc…) - AGiR! is considering proposing to test high and low flavanol chocolate's effects on genomic integrity! This will form one part of the initial citizen science trials for this project! Other potential plans include testing cells in the context of performing activities thought of as 'good' or 'bad' for you, and also testing the cells in isolation (ex situ assays)...
In terms of chocolate: There have been two publications on limited numbers of subjects in terms of flavanols from chocolate protecting skin cells from UV light, based on a sort of 'quantitative skin burn' method - measuring the so-called minimal erythema dose). Here are the abstracts from two interesting publications in that regard.
http://www.ncbi.nlm.nih.gov/pubmed/19735513
http://www.ncbi.nlm.nih.gov/pubmed/24970388
One of course found a significant effect and the other no significant UV protection of skin. (However a 'Net temple elasticity increased slightly but significantly by 0.09 ± 0.12 mm in the HFC group at 12 weeks compared to 0.02 ± 0.12 mm in the LFC group (MD: 0.06; 95% CI: 0.01 to 0.12 )' and this could be very interesting for many of us! 30g of chocolate a day was the dose, for 12 weeks and a 3 week washout in this study. Have a look! - They even discuss the several reasons that the results are not strictly comparable between the two studies. Trial design is so crucial! )

Maybe in the terms of this genomic integrity project for the Hackuarium, using cheek cells to assess both basal damage levels and damage levels in response to tests of ex situ effects of differing concentrations of hydrogen peroxide, for instance, after eating chocolate with high or low flavanol levels, will be more meaningful than that 'skin burn' model, based on just 30 people. The comet and micronuclei assays are extremely established and clearly quantitative.
Should be fun!
Furthermore, with citizen scientists everywhere involved, we may be able to get much bigger numbers than for those two previous works.
In the meantime…
A collaboration with a very keen 'chocolatier' from Gruyere may help us! We will try to see which of his dark chocolates contains the most flavanols (and perhaps he will modify some steps in the production process to increase the levels found!) and had a 'degustation' of his grand cru chocolates yesterday! (25 may 2016)


If you are interested in more information and a closer look at the results (in a nutshell, no significant preference was found for the four different chocolates provided, but there was a slight trend leading to two of the four seeming to be more preferred! Additionally, eating any of these magnificent chocolates made a commercial brand less attractive for many participants!), here is a page with further info about this: chocolate tasting 2016

As we are located in the land of chocolate - Switzerland - what could be better? Hoping people will like the idea! For us all!

Check out the Moss Menagerie project also, and spread the word! www.genomicintegrity.org