Difference between revisions of "Micro to Macro Water Pollution" 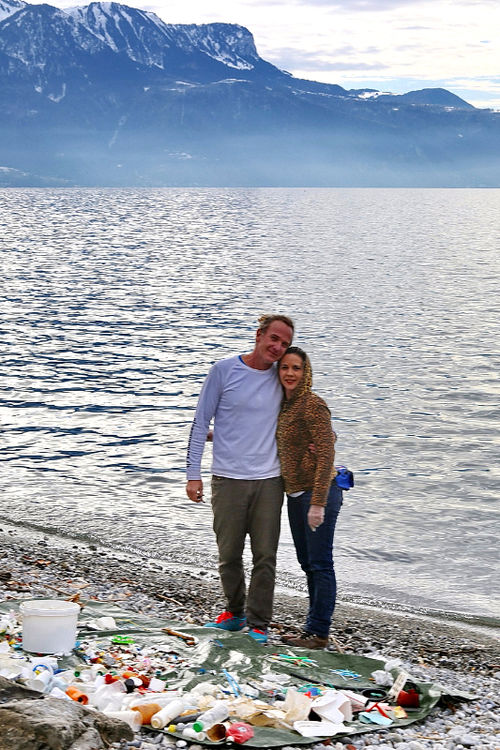 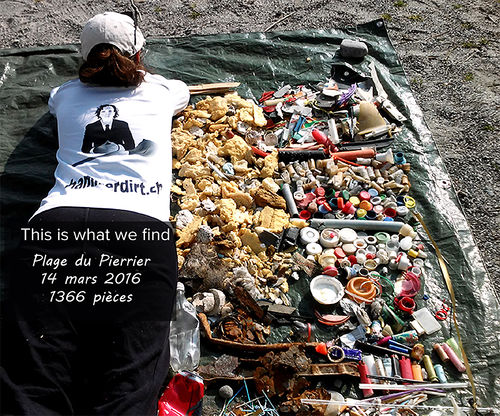 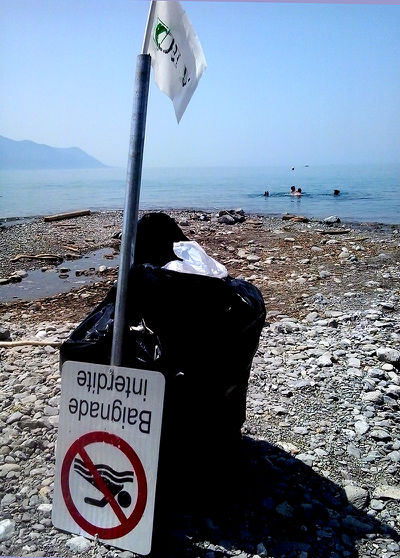 One of the benefits of a “Community Based Environmental Monitoring” (CBEM) project is to expand the monitoring capacity of government agencies and engage the public in environmental stewardship. In response to questions from the public and our own professional curiosity we have decided to initiate a limited CBEM project (1) (2) .


As part of the Montreux Clean Beach Project II (MCBPII), a water quality testing (WQT) program is being initiated at selected sites of the MCBPII. Symptoms reported by members and frequent bathers in the lake during previous summer seasons have sometimes been attributed to low bathing water quality, influenced by increased anthropogenic pressure of lakefront activities during certain times of the year. This year's WQT aims to gather microbiological and physical data over a six week period in order to test this hypothesis.


Meetings at “La Maison de la Rivière” and the “Institut National de Recherche Agronomique” support the idea that the WQT information proposed is not regularly collected at the Haut-Lac locations covered by the MCBPII.

CBEM programs are designed to educate the public, involve local citizens in environmental stewardship and provide reliable data for government and other interested organizations. In this regard the MCBPII CBEM program is no different than that of any other existing project. (2)(3)(4)(5)(6)


Specifically, the goals for this project are to: 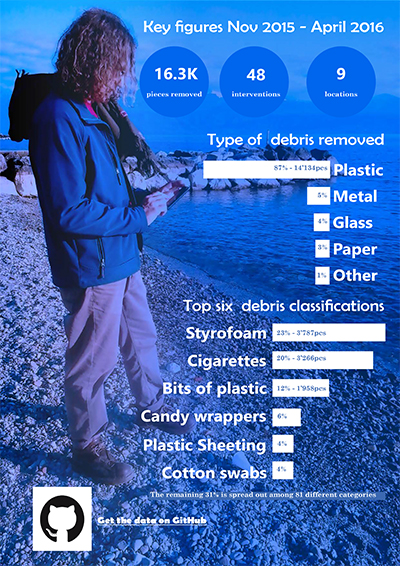 The objectives of a CBEM are designed to increase the monitoring capacity of current public systems and provide reliable, accessible data for the public and other government researchers. Data gathered from this project will be reported with our regular activity reports and the raw data will be available for download within 72 hours of the testing date from our repository on Github or through the KoboToolbox for the location in question. This document along with sampling protocols and all other supporting documents will be available on the wiki.

Weekly results will be furnished to the CIPEL, SIGE and INRA:

An end of project report will be published in PDF format, available for interested parties, and include:

Bioreporters, designed and fabricated by biodesign.cc will be used to test for Alkanes, Arsenic, Mercury and Cadmium/Zinc.


What are bioreporters ? Get some background information here

Testing materials and supplies will be procured from the World Water Monitoring Challenge an international program managed by the International Water Association and the Water Environment Federation.
Assembled and sold by Lamotte company as a “basic test kit,” each kit includes one set of hardware and enough reagents to conduct up to 50 rounds of testing for pH, dissolved oxygen, temperature, and turbidity. Included are: 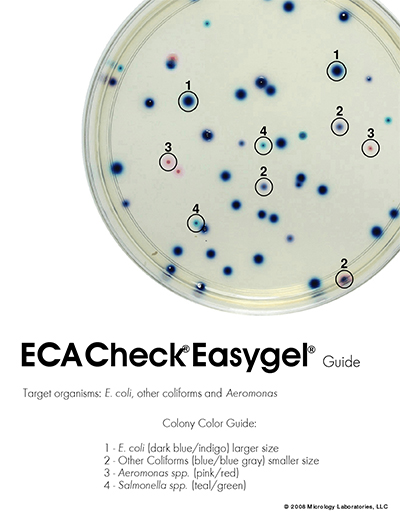 Presence and quantity of E.coli, other coli forms, Salmonella and Aeromonas will be tested using ECA Check Easygel. Easygel was first approved for Water Watch volunteer monitoring programs in the USA in 1999. A study released in 2009 compared the results of “Easygel” and “3M Petrifilm” used by volunteers to the results of laboratory analysis. Both methods had an overall accuracy rate above 80%. One big benefit of the Easygel format is that environmental samples of up to 5ml can be readily plated, with no worries about having to melt (and cool down!) agarose as used in standard microbial plates.(7)(8)(10)(14)


Members of the Hackuarium laboratory have used “Easygel” in previous educational activities, thus facilitating the training of hammedirt staff and volunteers.

Water samples will be taken just below the surface (0.5m) and collected in sterile containers with a secure, air-tight lid.


Advantage: simple and inexpensive, an important consideration to a program on a budget. It also does not require any special sampling apparatus. The volunteer holds a sampling container under the surface of the water, expells visible air bubbles, and closes the container under the water (to avoids losing dissolved gasses, particularly important if testing for volatile analytes).


Disadvantage: vertical gradients of temperature, oxygen, nutrients, and algae may be missed in these near surface samples. Deep lakes have a thermal gradient in the summer, and Lac Leman has at least two thermal regions (and, possibly, at least two chemical regions as well). Even in shallow, usually well-mixed lakes, chemical gradients will develop during calm periods.

Two samples of 250ml will be taken and transported to the hackuarium for later analysis. One sample will be acidified to fix the heavy metals in solution.

One sample will be taken using the container supplied with the testing kit and processed immediately.

Three independent samples will be taken from each designated site in conical tubes pre-labeled in the following manner:

Once collected, the samples will be placed on ice and transported to the facility at Renens for plating on the ECA Check plates within 6 hours. Label information will be recorded in the field notes and the “KoboToolBox” for that sampling date and location.

The instructions provided with the kit will be followed and the results will be noted in the field manual and entered into the “KoboToolbox” form for that sampling date and location.

One petri dish per sample will be labeled in the same manner as the sample container with the addition of the quantity of sample added to the media. A 1-5ml of sample water will be mixed into the provided gel media solution, plated and incubated for about 18 hours at the Hackuarium facility in Renens.


With values from three independent samples at each site, means and standard errors can be used to test significance of the obtained data over the course of the sampling period. 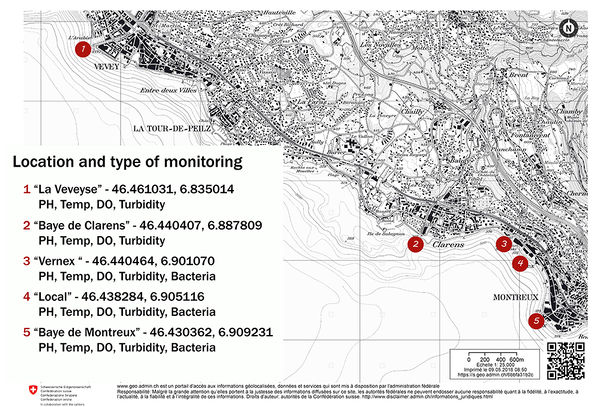 Three of the five locations are currently part of the MCBPII beach-litter-survey project. Point 4 will be added to the beach litter survey by using a net to catch visible pollutants on the water surface below the boat dock. Point 3 will only be monitored for chemistry and biologicals. Correlations of the test results with the physical location of the sampling will be of great interest.

To see a map of the locations that benefit from regular water quality monitoring : Eau de baignade

The Montreux Clean Beach Project 3 page has been begun!

Calendar from biodesign.cc to be embedded here

key dates to be defined :

Testing will begin about 20 June 2016, and weekly samples will be taken from locations 3, 4 and 5. A 'negative control' sample will also be obtained each week (tap water or a local drinking fountain, labelled 'eau potable'). A positive control from an urban river (like the Vuachère or other) is also planned.


If a Tuesday afternoon testing protocol is followed over 7 weeks, the timeline would run from 21 June -2 August, require 21 sterile 15ml conical tubes for the water sampling, and 21 ECA Check EasyGel plates per site. After including a single 'negative control' for each sampling day, this will require 70 plates.


In case there are too many bacteria to count (TMTC) from certain samples, samples will be saved at 4oC and further dilutions can be also plated and scored.

Testing will begin on the Tuesday or Thursday the week the kits are received (late May). The kit contains enough reagents to conduct 50 tests, thus allowing us to monitor the locations for 10 weeks. Data will be carefully recorded, digitized and analyzed.

Field blanks are used to assess potential contamination from sample handling, airborne materials, equipment, media, and other sources. A field blank usually consists of a sterile diluent sample of 2 mL that is taken to the site and poured into a properly labeled sample container during the first bacteria sampling event of that day. The blank sample is collected in the same type of container, labeled as a field blank, and handled and analyzed along with all the bacteria samples collected on that day. It is used to identify errors or contamination in sample collection and analysis.

The addition of water quality testing will require changes in our digital form and reporting methods. The form currently used by surveyors will change, thus separating the data in two sections, one section prior to WQT and one after. Data for the two sections will have to be merged prior to any analysis. The results of bacterial testing will be available 48-72 hours after sampling, thus adding another step to the survey. This should not, however, change the availability of the other survey results which is currently 24 hours after each survey.

The existing data set for MCBPII includes visible pollution surveys, hydrologic and meteorological data. With the addition of microbiological and basic water chemistry a more complete picture of the environmental status of the locations in question can be established.


The relationship between the results of WQT and the quantity and type of visible pollutants will be explored.


How is the water currently monitored and evaluated ? Here is the source document from the Swiss Confederation Eaux de baignade

CBEMresults : Here is a page which will lead to the results of this Community based Environmental Monitoring program (summer 2016) and further info.

Sampling and Analysis in Community Based Environmental Monitoring

Agree on documentation and collaboration tools

The presence of E. coli in natural waters is a direct indication of fecal contamination. Coliform bacteria and other bacterial species can also be found in public waters and may contribute to human pathologies. There are several methods to distinguish E. coli, coliform and other bacteria vs other microorganisms that may grow on an agar plate, of special interest 'chromogenic media' which contain substrates that form specific colors depending on enzymes produced by each species.

Protocol from the Micrology Labs

To note: the Micrology Lab ECA Easygel plates are somewhat expensive, but can assay up to 5ml of sampled water per plate for ready scoring and disposal. Another currently proposed plate media would not only be less discriminating, but require more equipment for the sterile setup and final cleanup, and probably only allow 0.5ml to be assayed/plate. The Micrology plates are also used in other 'citizen science' campaigns and approved by regulatory bodies...

This is not a DIY gel, but ENDO agar was used for the workshops Lifepatch conducted in Indonesia: Quantification of e. coli contamination in water
From Lifepatch, we have set this up DIY automatic colony counter.

Basic calculation for cost for one time analysis:

Use glass petri-dishes for recycling - we can as Lifepatch how they set it up.

Otherwise, the system for working with the bioreporters has been approved with the Swiss authorities.

Short History of the Collaboration

Hammerdirt came to the BIO-DESIGN for the REAL WORLD's Winter School with data on the macropollutants washing up on the local beaches in and around Montreux (CH). The data format conforms to international norms, and over two years, some patterns can be observed in the level of litter on the shores. The collaboration will be an exchange and complement to what is already on-going at Hammerdirt.
The presentation from that day can be found here: How can we work together ? 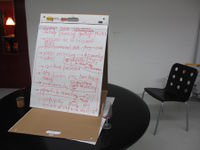 At Open Hackuarium #88, we came up with some initial ideas.