We are investigating life that gives off light!!

already we have dinoflagellates (without flagella!) and Photobacterium phosphorum !
(hoping for some glowing mycelia, but wonder if it is simply phosphorescence there...)

It all started with 2 students from Nyon, who wanted to do their 'travail de maturité' with some bioluminscent bacteria, to make a mosaic!

They ordered Vibrio fischeri from a French biotech company in a special kit.

while a bit of light was visible in cultures, in comparison to controls, and determined by unbiased dark-adapted participants, it was not very bright, and no good pictures were obtained of it...


Advice was requested from

Help was also obtained from

esp, as Rachel also ordered some bioluminescent Dinoflagellates from a company in the states.

Recent results in the new BioLab in Ecublens

The strain obtained by the students from Nyon last year actually isn't V. fischeri, but the recommended Photobacterium phosphorum


For additional documentation, 27F and 907R are in this table:
https://www.nature.com/articles/nprot.2014.067/tables/1
(there are references of other classic papers to the right of this table)

(To note: ideally used freeze-thaw extract of bacterial colonies, as all species do not amplify if simply added to the mix with a toothpick.
We touch the toothpick tip to the colony to be tested, and swirl it in a tube with 20ul of water (PCR clean, of course!) and put it to freeze. After thawing, 0.5ul of this solution is good input for a pcr reaction.)

blast showed about 92% identity over the 16S rRNA region sequenced vs. V. fischeri, so it seems clear that the french co also thought the P. phos was brighter, but didn't want to waste their kit boxes!  :) 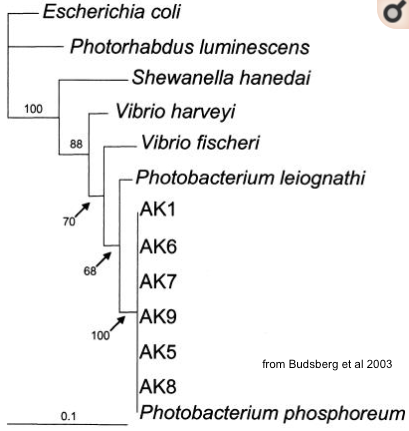 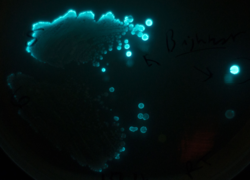 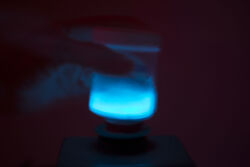 Will add a pic of these dino cells soon!!

The challenge is to get their real color in images, and to make them bright...
extra salt is seemingly very important!
but maybe not malic acid... The second test for this is ongoing!
Clearly, temperature is a big factor in getting colonies bright! After being in the frig, we see more!!
However, the brightest colonies do not always streak out well on fresh plates. Maybe the aldehydes in the light reaction are toxic, and this is part of the reason for quorum effect regulation - to make sure there are some other bugs that will not be bright, and remain able to grow!??
more results to come soon!